Arachnids are one of two enemy races included in the base game.  These unintelligent bug-like creatures swarm there heroes with great numbers, biting, clawing, and spitting to attack. 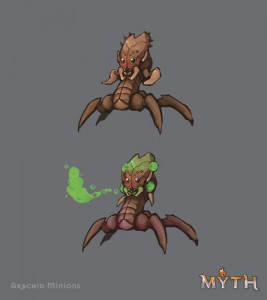 Crawlers come in both biting (melee) and spitting (ranged) versions, and each lair will contain a mix of these creatures.  Although individually weak, they spawn in greater numbers than other creature types, and still make a challenging foe for heroes.  Don’t underestimate the power of massed attacks, especially when they can come at range, making it more difficult to retaliate.

Stalkers are terrifying enemies that can cause their foes to stop in fear.  They can quickly take advantage of this due to their two claw attacks and a poisonous tail.  Poison can continuously does damage to victims, making it a deadly weapon.  Also beware of their ability to burrow into the ground, which can quickly confound the well laid out strategies of the heroes, and help the Stalker reach weaker foes. 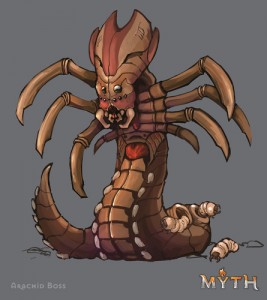 Although this is one of the two weakest bosses in the game, don’t underestimate this foe.  It’s armored carapace makes it difficult to wound, and it will require 16 wounds before it stays down.  It’s pincers and stingers allow it to hit heroes all around it, which would make it formidable, but when you add the abilities to burrow under the heroes, cause tremors, attack with 6 claws, spawn larvae, and web the heroes then you have deadly opponent sure to make an epic fight.