Orcs are one of two enemy races included in the base game.  Using intelligent tactics combined with numbers, these foes try to overrun their enemies. 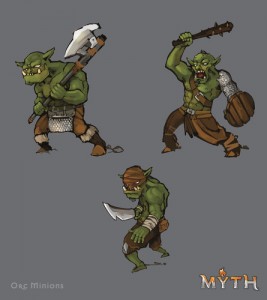 Grubbers are the foot soldiers of the orcs, charging into battle against the heroes.  They make up for their lack of ranged attacks grubbers have some armor to protect them as they rush forward to attack their enemies. 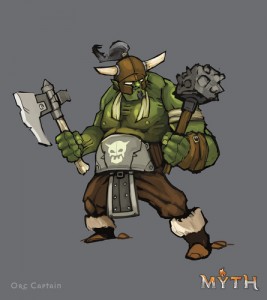 Although not as individually dangerous as his counterpart in the arachnids, the heavy armor of the Mucker makes him much more durable.  This isn’t to say he doesn’t pack a punch however.  His two attacks and ability to knock his enemy prone, can be dangerous.  However, his true power comes in his leadership of other orcs, adding one grubber to orc spawns.  If multiple Muckers are in a battle, orcs can have numbers even arachnids can’t match.

Note: Orcneas is not included in the base set.  He was a stretch goal of the kickstarter and will be available via a future expansion set.

Orcneas is one of the two weakest bosses in the game.  So far we know he has the ability to leap into battle, and he will presumably combine high armor, and a pair of mighty attacks.  At this point we don’t really know much of his other abilities.