We are in the final week of the Mercs Recon Kickstarter, ending the morning of April 18 CDT.  I don’t usually post a lot about other games on here, but this game is very important to Myth players and collectors due to the number of crossovers.

At the time of this writing, there are two Myth stretch goals unlocked, and the campaign is closing in on a third.  MegaCon Games has promised further Myth goals to come this week.  All Myth goals are included in the Agent ($120) and Opfor ($200) pledges, and for those just looking to keep up with Myth without adding another game (or 3!) there is a Myth only pledge at $40. 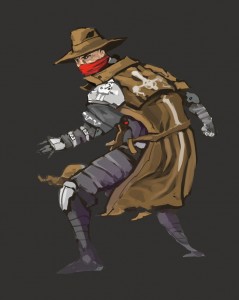 The first Myth crossover was an additional agent.  For those who don’t remember agents from the original Myth campaign, agents are similar to minibosses, except they are recurring enemies that will hound the heroes from adventure to adventure.

“In Myth, he is an Agent class Darkness monster named Inquisitor Alger. He pesters the Heroes from a distance, with an attack called Confessor’s Call that doesn’t damage but increases the Hero he hits Threat.

If defeated, he grants the Heroes an Agent ability card named Master Tactician. It can only be played in the 1st action space, but if it is played then the card in the 2nd action space costs 0AP.”

The latest Myth addition unlocked is the Hunter, giving us the 9th available hero for the game of Myth.  (I know this release will change up my 2015 plans slightly for the heroes to be included in my Rings of Ia campaign.)

“The Hunter is a hybrid ranged/melee Hero. He does NOT share the Archer’s LOS special ability. His deck mechanic is pretty cool. He plays Ongoing “mark” cards. If the Hunter kills the mark the mini is placed on the card and he receives big attack bonuses to killing the same monster-types. He can double up his bonus with another mark card.

Regardless, when the Hunter marks a monster-type, other monster-types have bonuses to hurt him. The Hunter can dump the Ongoing card like the Apprentice. As he grows into Journeyman and beyond, he can mark more than one monster-type.

The Hunter was created as we designed the dual-wielding game mechanic last year (he dual wields).” 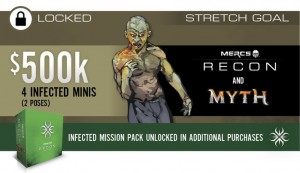 The final announced Myth stretch goal is the infected, which seams to be a new minion type for Myth usable for hunting packs at this point.  It remains to be seen how much the infected will go beyond this role, and whether it’s a new race, or connected to an existing race.  (I was personally hoping for them to be a part of the bugs race instead of undead, but as another player pointed out to me, they make even more sense connected to the cyclopses, as they could be people infected by plan spores that haven’t sprouted an eye.)

MegaCon has already said more Myth goals to come.  This kickstarter is ahead of where Myth was at the same time.  Should be a wild ride, hopefully with a lot more Myth additions to come, shaping the next step of the game, and giving an idea of what will come for the game in the future.